It's the most wonderful time again. Christmas season is upon us. After a relaxing Thanksgiving of reflecting on our blessings, it's now time to spread joy to our fellow man. One quick and effective way to do this is with candy, of course. Here we break down how each state spreads candy joy. Hover over your state to see the most popular Christmas candy. 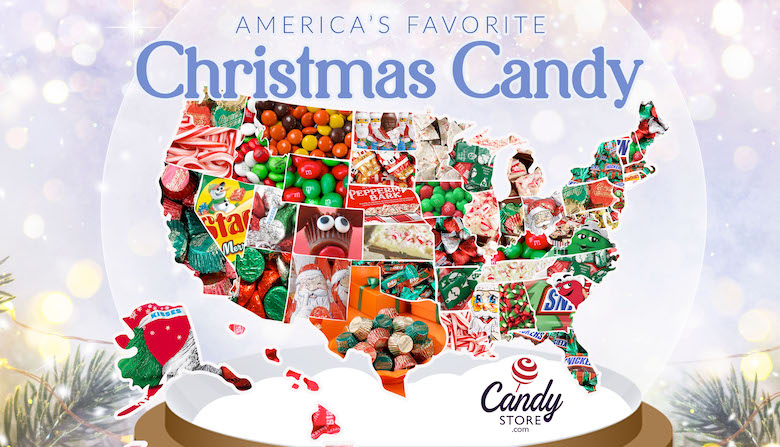 The map above illustrates the results of our latest candy research: the top 3 most popular Christmas candies in each state. Hover over your state (non-mobile only) to see the goods.

It may not seem like Christmas is all about candy, because obviously there is so much more to the holiday season. But there is also a lot of candy happening. Think about all the baking and decorating and making fun crafts with kids that happens in the weeks leading up to Christmas.

Since we're an online bulk candy store, we reached out to CandyStore.com customers to find that out. We got over 16,000 responses this year. We also checked in with our friendly major candy manufacturers and distributors to be sure our survey corresponded with their seasonal observations.

To say people are eager for the Holidays to begin might be an understatement this year. The National Retail Federation says that nearly half (46%) of holiday shoppers will start their shopping before Halloween!

Fear of continued inflation might be driving some people to shop now. Over eighty percent said they expect prices to go up on gift items. Thirty percent said the best deals were already available in November. They are getting started early and spreading out their spending.

Still the NRF predicts that holiday spending will increase by 6-8% this year, up to $960B. Not too shabby.

Last year peppermint bark went bonkers and picked up 3 new #1 spots. It seems it might have over saturated the market. This year, it lost 6 number one spots. Three more than it gained last year, and they are big ones.

California and Texas are the two largest states and they both cooled on peppermint bark this year.  So peppermint bark is moving backwards. But you can never count it out. Don't forget, we are not even taking into account the homemade bark made in your own kitchens.

Candy canes are falling in popularity as well. They lost four #1 spots this year, including New York, where they were replaced by Snickers and New Hampshire where M&M's are now the top candy.

Candy canes are not the universally-loved Christmas candy you might think. They are often found on the WORST Christmas candy list, in fact. People who don't like them cite reasons like they can be messy to eat, hard to unwrap in one whole piece and, once sucked on for a while, become sharp and dangerous.

But a lot of people still love them. Me included.

KitKat Bursts onto the Scence

Having never made a #1 showing, this year KitKat has 2 of them!

Massachusetts and Oklahoma both prefer KitKats at Christmas. Interestingly, both states had candy canes at #1 last year. So the candy cane trend is opening up opportunities for new holiday candies like KitKat to gain some love.

Starbursts don't seem like a particularly traditional holiday candy, but who knows what those crazy kids are up to nowadays. Starburst picked up 2 number one spots this year in Nevada and Wisconsin. Peppermint bark took the L in both those states.

31% of gift givers plan to give candy.

60% of Holiday shoppers started by the beginning of November.

56% of holiday sales are expected to be online.

If you get the wrong thing, just remember that - really - the holiday season is about family and friends. It's the thought that counts, the gesture that matters. Unless you give me reindeer corn, in which case we are no longer friends.