Happy Valentine's Day, everyone! With the holiday of love just around the corner, it's time to start thinking about what candy we'll be giving to our loved ones. But what type of candy will each state be consuming this year? We've done the research, and we've got the answer. You won't want to miss this; here are the most popular Valentine's candy by state in 2023. 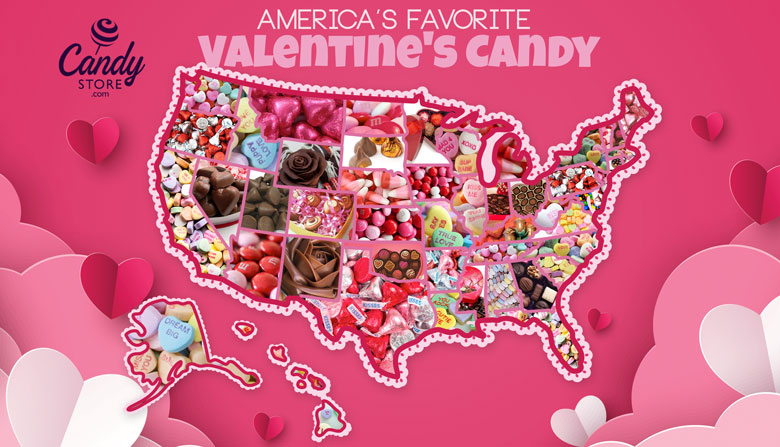 * Map is not interactive on mobile devices, see chart below for rankings

We mashed up data and candy to make a really cool interactive map. There were some awesome findings, and heaps of conversation hearts and chocolate to dig into. Plus, the trends we uncovered were pretty entertaining.

People are gonna be shelling out big bucks this Valentine's Day - the National Retail Federation's survey says we'll be spending a whopping $25.9 billion, which is even more than last year's $23.9 billion. And it would be a record-breaking year, except 2020 was $27.4 billion! Ah, the pre-covid days.

The number of people buying candy for Valentine's Day is expected to be at a new record high with 57% of consumers.

That's the macro view. We've also got the scoop on which sweet treats are the most popular this Valentine's Day.

CandyStore.com crunched the numbers from 15 years of our online bulk candy store and industry partners - check out the interactive map above to see which candy each state loves. And don't worry if you're on mobile - you can still see the results in the chart down below.

Here are some of the key takeaways from our data. In 2020, they were back but only a limited supply was available. As new owner Spangler hurried to get them out, they ran into some printing issues and the cute little sayings written on them were distorted and blurred. Quite a few of them were blank - no words at all. Doh!

The last two years they broke through again, reclaiming their dominance with a particular vengeance in 2022. With Spangler introducing all new sayings on Sweethearts, conversation hearts made a heroic comeback in 2021, and all seems to be going very well for the chatty little cardiacs.

Hershey's Kisses are quickly making their way up the list of the most popular Valentine's Day candy. Hershey'sKisses picked up two #1 spots this year and several runners up and third place finishes as well. M&M's, which had been making steady progress up the chart for the last few years, got knocked off the top spot in two states, Oregon and Pennsylvania. By whom? None other than Hershey Kisses.

Cupid Corn Back to #1 in Michigan

Just when we thought they were fading away, cupid corn made a comeback last year. After claiming a new #1 state in Nebraska, candy corn also regained the #1 spot in Michigan, where it had fallen as far as the nimbler 3 spot in recent years after a long time top V-day candy for the state.

47% of people said they will buy themselves a box of chocolates this year.

58 million pounds of chocolate are bought during Valentine's Day week.

The peak selling period for conversation hearts is only 6 weeks long. Wow!

In Japan, chocolate is given to men, not women, on Valentine’s Day.

In Wales, wooden love spoons were traditionally given as a token of love.

The first Valentine’s Day candy box was created by Richard Cadbury in the late 1800s.

The most popular Valentine’s Day color is red.

Each year, an estimated 1 billion cards are exchanged on Valentine's Day.

The oldest box of Valentine's Day candy dates back to the early 1900s.

In the Middle Ages, valentines were handmade gifts like love poems or artwork.

About 36 million heart-shaped boxes of chocolate are sold each year leading up to Valentine's Day.

Here is a table with each state's winners: